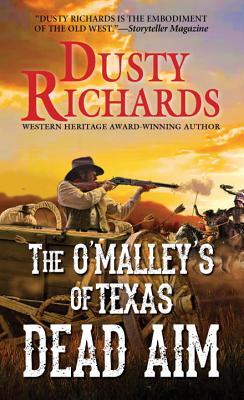 Synopsis:
From Western Writers of America Spur Award-winning author Dusty Richards comes a thrilling new chapter in the O'Malley family saga, a blazing American epic of blood, bullets, and brotherhood set deep in the heart of Texas . . . Long John O'Malley is only nineteen years old, but he's no greenhorn. The oldest and boldest of the O'Malley brothers, Long John cut his teeth tangling with Comanche at the tender age of sixteen. He risked his life to rescue a group of captive women settlers--and forged his own destiny as a hero in the making.Now he's taking on his biggest challenge yet: riding shotgun on a wagon train across the hostile Nebraska Territory. It's a treacherous trail, and it's not long before the young Texan is earning his paycheck by fighting off a tribe of bloodthirsty Sioux. But the real test lies in the journey ahead--a genuine ride to hell and back, from the Rocky Mountains to Sante Fe and all the way home--that will either make Long John O'Malley a living legend . . . or a dead one.


Review: ⭐⭐⭐⭐⭐
I love this series! I hope he continues it. This is written along the same tones that Louis L'Amour used, and I grew up listening to his stories.

Long O'Malley is the primary character in this one.  After Long returns from his trip to the Rockies (woman in tow) he gets married. The brothers are trying to buy up the properties that their ranch surrounds.  There is another cattle drive, Indian fighting, and raiders killing and terrorizing his men. Long and Harp receive an offer to buy the Three Star Ranch at a low price. Long and Harper decide that Long and his new bride will live and work this ranch. Long had no idea how bad the ranch was or the huge surprise he found when he started cleaning it up.


This is another book where the author does amazing at using historical events and political troubles that actually happened to bring his book to life. There is also a surprise! Wild Bill Hickok is a Sheriff and makes an appearance. I was really excited for that. At the end, Long's life takes an interesting turn. The author left enough of a cliff hanger that I can't wait to read the next one, but I felt satisfied after finishing it.
at January 10, 2018