Sold on a Monday by Kristina McMorris 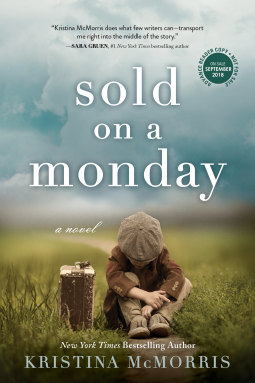 Philadelphia, 1931. A young, ambitious reporter named Ellis Reed photographs a pair of young siblings on the front porch of a farmhouse next to a sign: “2 children for sale.”

With the help of newspaper secretary Lily Palmer, Ellis writes an article to accompany the photo. Capturing the hardships of American families during the Great Depression, the feature story generates national attention and Ellis’s career skyrockets.

But the photograph also leads to consequences more devastating than ever imagined—and it will take jeopardizing everything Ellis and Lily value to unravel the mystery and set things right.

Inspired by an actual newspaper photo that stunned readers throughout the country, Sold on a Monday is a powerful novel of ambition, redemption, love, and family.

Historically accurate and amazing! This book is about a series of events that stem from a picture. After the great depression, many families still suffered. Ellis happened upon two boys standing behind a sign that said: "For Sale". He snapped a quick picture for himself but developed it at his newspaper office. The Cheif's secretary happened across it and gave it to him. The Chief liked the photo and wanted Ellis to write a story to accompany it. After a mishap in the developing room, Ellis's picture was destroyed. Eager to impress his boss, he drove back out to the house to hopefully take another. The family had moved, but across the street, there were two other kids. Using them as substitutes, Ellis uses their picture. This sparks a chain of events of ladder climbing reporters, children actually sold, a mother desperate to get them back, and the need to right wrongs. With sprinkles of the different mafia families of that time.


This story was amazing. The lengths that Lilly and Ellis go through to protect their secrets and fix what happened were a rollercoaster. I was on the edge of my seat, flipping through pages as fast as my kindle would allow me to. My heart broke for Geraldine. As a mother, I couldn't imagine having to go through what she did. Then my heart broke a little bit more to learn what had happened to the children. Then the author brought me back up with an amazing ending that tied everything up perfectly.
at June 12, 2018