The Lost Queen by Signe Pike 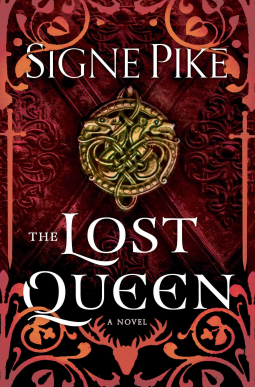 Synopsis:
Compared to Outlander and The Mists of Avalon, this thrilling first novel of a debut trilogy reveals the untold story of Languoreth—a forgotten queen of sixth-century Scotland—twin sister of the man who inspired the legend of Merlin.

I write because I have seen the darkness that will come. Already there are those who seek to tell a new history...

In a land of mountains and mist, tradition and superstition, Languoreth and her brother Lailoken are raised in the Old Way of their ancestors. But in Scotland, a new religion is rising, one that brings disruption, bloodshed, and riot. And even as her family faces the burgeoning forces of Christianity, the Anglo-Saxons, bent on colonization, are encroaching from the east. When conflict brings the hero Emrys Pendragon to her father’s door, Languoreth finds love with one of his warriors. Her deep connection to Maelgwn is forged by enchantment, but she is promised in marriage to Rhydderch, son of a Christian king. As Languoreth is catapulted into a world of violence and political intrigue, she must learn to adapt. Together with her brother—a warrior and druid known to history as Myrddin—Languoreth must assume her duty to fight for the preservation of the Old Way and the survival of her kingdom, or risk the loss of them both forever.

Based on new scholarship, this tale of bravery and conflicted love brings a lost queen back to life—rescuing her from obscurity, and reaffirming her place at the center of one of the most enduring legends of all time.